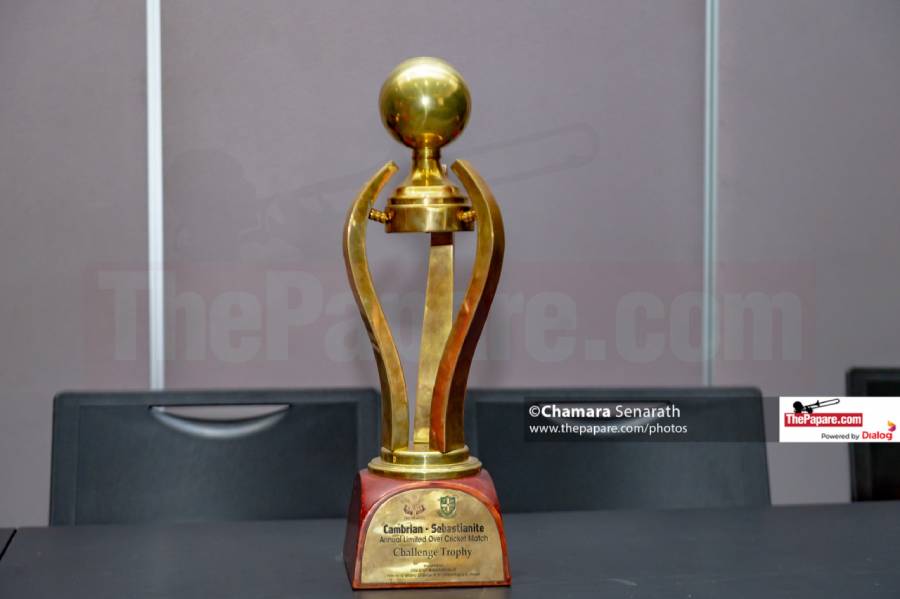 The toss was tried at 9.55 am as the match started a bit late due to the damp pitch in the morning. Accordingly, St. Sebastian’s captain Bihanga Mendis, who won the toss of the match, invited the rival Wales Kumara College team to bat first.

At the start of the match, there was a cloudy and dark weather condition, but after a while, strong sunshine started to fall on the stadium, creating a very suitable weather condition for the game of cricket.

Captain Tharindu Amarasinghe and Rivith Jayasuriya, who entered the field as Prince of Wales openers, managed to get a very successful start for their team. Accordingly, the number of runs added by the two of them for the first wicket is 64.

However, when Rivith, who had scored 28 runs, was dismissed in the 16th over, the end of this relationship was marked. It was a shot by Rivith on a ball sent by right-arm spinner Sandish Fernando, and Yashan Avishka, who was stationed in the ‘long-on’ zone, saved it in a very excellent way.

Here, playing an innings of leadership, Tharindu, who engaged in a very remarkable batting, scored a precious half-century, putting strong pressure on the opposing bowlers.

However, when Omesh Mendis, who came to the field after the collapse of the first wicket, had scored only 6 runs, the right-arm off-spinner Nadish Fernando managed to return to the stadium, bringing St. Sebastian into the game.

Then when the match was stopped for lunch, Prince of Wales scoreboard showed 100 runs for 2 wickets at the end of 26 overs.

After the start of the match, Nadish, who was active again, managed to knock out the skipper Tharindu, who was batting very well at that time, for 68 runs as the third wicket of the Prince of Wales innings. Tharindu’s innings was colorful with 6 fours and one 6.

With that wicket, the collapse of the Prince of Wales innings began with Suvahas Fernando, Ashen Shanaka and vice-captain Vidath Dinendra getting out for very low scores. After losing their wickets, the scoreboard read Prince of Wales 129 for 6.

Then Sumalka Fernando and Chenula Fernando joined the field and tried to build the Prince of Wales innings again, but their relationship was limited to 18 runs. That was with left-arm spinner Manuj Chanthuka taking out Sumalka for 22 runs.

While Prince of Wales added 2 more runs to the innings, the opposing St. Sebastian’s bowlers managed to take all their remaining 3 wickets. Accordingly, the Prince of Wales was restricted to 149 runs in the first innings in 45.3 overs.

While Sandish claimed 4 wickets in the St. Sebastian bowling fleet, Nadish and Manuja shared 3 wickets each.

Savindu Rodrigu and Ryan Dissanayake who entered the field starting the reply innings had to build their innings slowly by hitting the ball very carefully. Accordingly, they got off to a successful start for St. Sebastian’s and added a 63-run partnership for the first wicket.

Right-arm spinner Prince Fernando broke the tie by taking the wicket of Savindu, who had scored 36 runs at that time.

Then the leader Bihanga Mendis, who came to the field, managed to divert the stadium again when he had scored only one point.

The Prince of Wales spinners, who did not give any space to the opposition new batsmen to settle in the field, managed to take the wickets of Yashan Avishka, Sandesh Fernando and Nilash Perera quickly, breaking their 6 wickets when the scoreboard read 110 runs.

While the wickets were falling at one end, opener Ryan, who played a valuable innings at the other end, managed to score a half century here. Accordingly, his innings was extremely important to keep St. Sebastian in the game.

Before the end of the day, Prince of Wales skipper Tarindu caught the opponent Mahen Silva for 7 runs and took his wicket, putting St. Sebastian in a difficult situation.

With that wicket, when the umpires signaled the end of the day, St. Sebastian’s team had recorded 120 runs with the loss of 7 wickets. Accordingly, they are still 29 runs behind the Prince of Wales first innings with 3 wickets in hand.

Ryan Dissanayake remained in the field with 55 runs unbeaten and Prince, who bowled brilliantly for the Princes of Wales, managed to take 3 wickets and Kunchana Perera took 2 wickets.

The second and final day of the competition is tomorrow.

Experience the heat of the battle live and stay tuned to ThePapare.com.