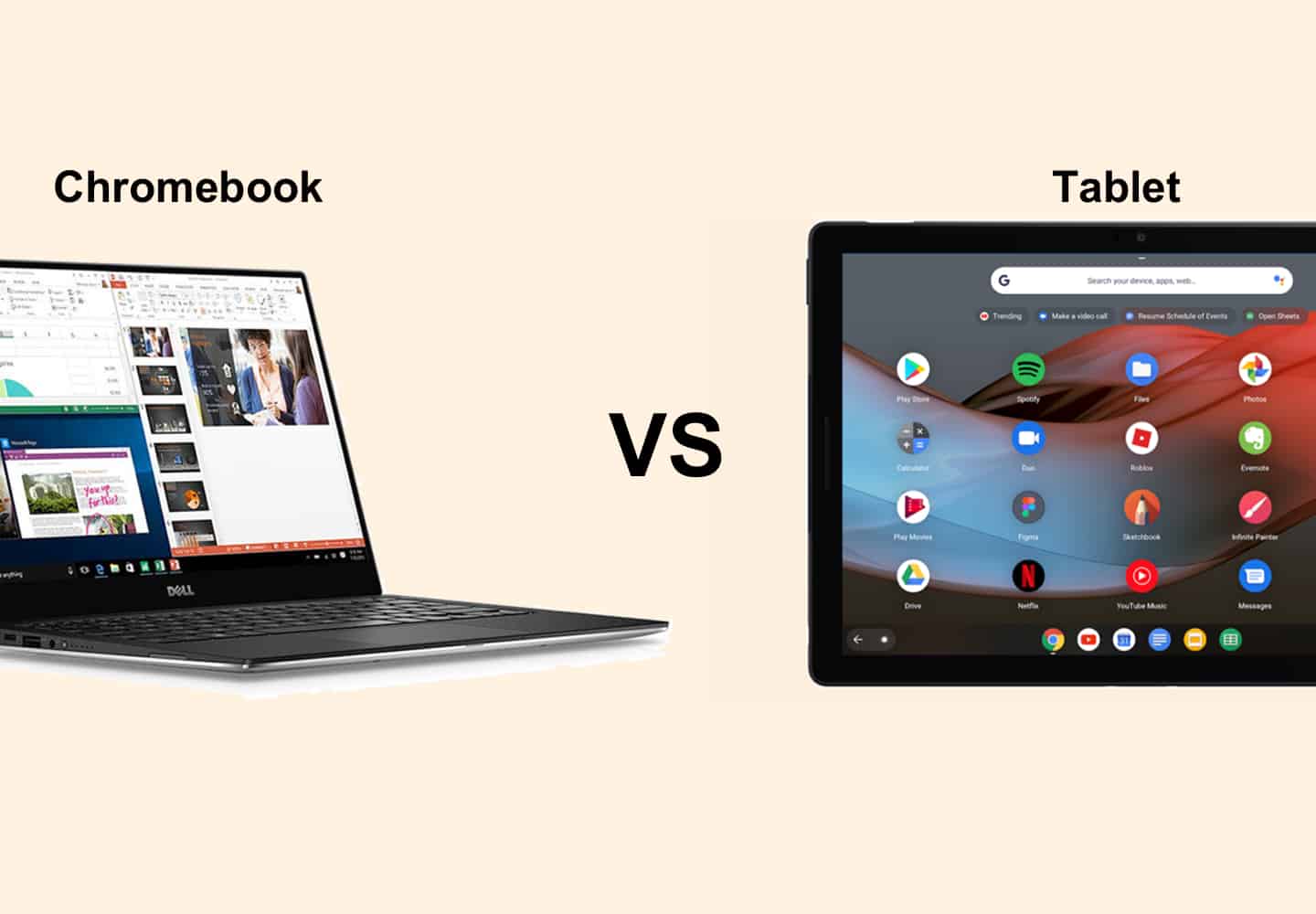 Decisions were once straightforward. You got a laptop if you needed a portable computer, but now you have more options in the form of Chromebooks and tablets. And the difference between Chromebook vs tablet is becoming increasingly blurred nowadays. In terms of price, both are less expensive than a conventional laptop, but which one is better?

Working from home requires specialized equipment for many of us. Perhaps the most important item we need is a laptop or tablet, which these days might be a Chromebook or an iPad or Android tablet. Both gadgets have their advantages and disadvantages, and we’ll show you which one is best for you.

Chromebook vs Tablet: Pros and Cons

To assist you in making an informed decision, we’ve compiled this list of pros and cons of Chromebook vs tablet.

First, let’s check out the good and bad things you get with a tablet.

Now, let’s take a look at the good and bad things that come with a Chromebook.

We compare all the essential features for a full-fledged Chromebook vs tablet comparison.

Tablets come in various sizes and resolutions, depending on the manufacturer. There is a big difference in the display resolution between the iPad Air (2224×1668 pixels) and Surface Go (1800×1200 pixels). Tablets often have sharper screens and higher resolutions than Chromebooks. Because of this, tablets are more suited for watching films, playing games, or making art.

It’s also essential to remember that not all Chromebooks have a touchscreen, unlike all tablets. In addition to the Google Pixelbook Go, Samsung Chromebook Pro is one of the few touchscreen Chromebooks. Remember to look at the touchscreen capabilities of any Chromebook you’re considering.

Compared to Chromebooks, tablets display a larger spectrum of realistic colors. While Chromebooks range from 50 to 96 percent sRGB, the average tablet’s color range covers roughly 93 percent of the gamut.

Both tablets and Chromebooks have varying levels of quality depending on their pricing. Tablets have a smaller structural profile and are more comfortable in your hand. If you plan to use your tablet as a laptop, you’ll be happy to know that most tablets have pen and external keyboard support.

Like tablets, Chromebooks can only be used in one mode at a time. Chromebooks are also heavier than tablets, reducing their portability. Thanks to their lightweight design and portability, tablets are the clear winner in this category.

Almost all big tablets are lighter than Chromebooks. A 9.7-inch tablet like iPad Pro or Surface Pro 7 weighs around 1.57 lbs to 1.73 lbs. Chromebook such as the Lenovo 100S Chromebook or Dell Chromebook 13 weighs about 2.8 lbs to 3.23 lbs.

If you’re going to be hauling your device around everywhere, even a few more ounces may make a significant impact. While a tablet may easily fit into a backpack or big handbag, a thicker and heavier Chromebook will require more room.

In terms of battery life, both Chromebooks and tablets can hold a charge for several hours, but Chromebooks with the best battery life win out. Chromebooks, on average, can run for up to 12 hours before needing a recharge. For example, the Acer Chromebook 14 has a battery life of 12 hours, whereas Lenovo’s Chromebook S330 can last for 10 hours.

While on a single charge, a tablet may last for roughly 8.5 hours. There are exceptions to this rule, though. For instance, some tablets can last up to 14 hours, like the Lenovo Yoga Tab 3.

The most basic tablets have 16GB/32GB of storage capacity, while the most expensive models could have terabytes of storage.

You don’t have to worry about manually uploading things to Google Drive using a Chromebook. You’ll be able to get to your files from any location. Cloud-based storage is available on most tablets; however, it varies by manufacturer, OS, and subscription.

Chromebooks include USB ports that can connect external memory devices, making it easy to extend storage space on the device. Flash memory cards with SD card ports are also available on a few models. The largest tablet devices often lack these functions, but some models may feature microSD slots for storage expansion.

A trackpad and keyboard come integrated in a Chromebook, making it easy to text and browse the Internet. You can fold and put it in a bag like a laptop. A tablet does not come with a keyboard or mouse because it has a touchscreen by default. Typing on a touchscreen is inefficient; you’ll waste time and make more mistakes than if you typed on a regular keyboard instead.

You can buy a Bluetooth keyboard for your tablet so that you don’t have to type on the touchscreen. Similarly, you can also get a stylus.

A Chromebook is the best option if you’re going to be using your device for both work and study. Instead of fumbling with an external keyboard, you can just sit down and get some work done without having to have it around.

Chromebooks and tablets can both run applications, but the apps you can run will be different. Chromebooks are powered by Chrome OS, a Google-designed operating system that smoothly integrates with Google Drive and Chrome. In addition to gaming and streaming apps, you can still install professional software like Microsoft Office and Adobe Lightroom on your Chromebook.

You’ll be able to download apps from the Google Play Store on Android tablets. Technically, Chromebooks can get their apps through Google Play, but this isn’t always the case. Apple’s App Store has millions of apps available for iPad users to choose from.

It is disappointing that Chromebooks can only run apps from Chrome Web Store and a few apps from Google Play Store. Despite this, many apps are still available for Android and iOS tablets.

In addition to Chrome OS, Google also develops the Android operating system. Both operating systems were developed for distinct reasons. The Chrome browser and Drive apps, such as Docs and Sheets, are at the heart of Chrome OS. Unlike Chrome OS, Android is a tablet-specific mobile operating system that contains apps. Despite Chrome OS’s ability to execute some Android apps, these programs often lag.

Only apps developed specifically for the iOS platform can run on Apple iPads. Tablets run more apps than Chromebooks, even with Android and iOS constraints.

Chromebooks and tablets have a wide range of hardware options. An ARM-based CPU (available in many tablets) was initially used in Chromebooks with Samsung Series 3. Like the Samsung Galaxy Tab 3, some tablets use an Intel Atom processor used in cheap laptops.

For the most part, the two systems are approximately equivalent in raw processing power. It all ultimately comes down to evaluating different models. Both systems are capable enough for basic computing needs, but neither can match the capability of standard laptop computers.

Chromebooks and tablets are far less expensive than full-fledged computers. Chromebooks start at $159, but the most powerful models (such as the Google Pixelbook) may cost as much as $1,000.

The cost of a tablet might also vary substantially. A tablet such as the Amazon Fire 7 can be yours at $50, yet the iPad Pro will set you back $800. If you desire more peripherals, the price will go up.

We list key differences and similarities between Chromebook vs tablet.

Check out the differences between Chromebook vs tablet.

Check out the similarities between Chromebook vs tablet.

Competition in Chromebook and tablet prices has led to lower prices for consumers. Tablets are cheaper at the starting level. While many Android tablets cost less than $150, many Chromebooks are in the $200-$300 range. A top-of-the-line tablet might cost nearly twice the price. While the screen quality can make a big difference in the price of a tablet, Chromebooks tend to be about the same.

When it comes down to it, the most critical factor to consider when choosing between a Chromebook vs tablet is how you want to use it! Chromebook is an option if you’re looking for a low-cost laptop for academic tasks like completing assignments and research. One of the most cost-effective ways to enjoy your favorite media is through the use of a tablet.

Tablets are more convenient to carry about (even if you add a keyboard or dock), have brighter displays, and have a more extensive selection of apps than Chromebooks. The offline capabilities of Chromebooks have improved over time, but a tablet still has a lot more to offer.