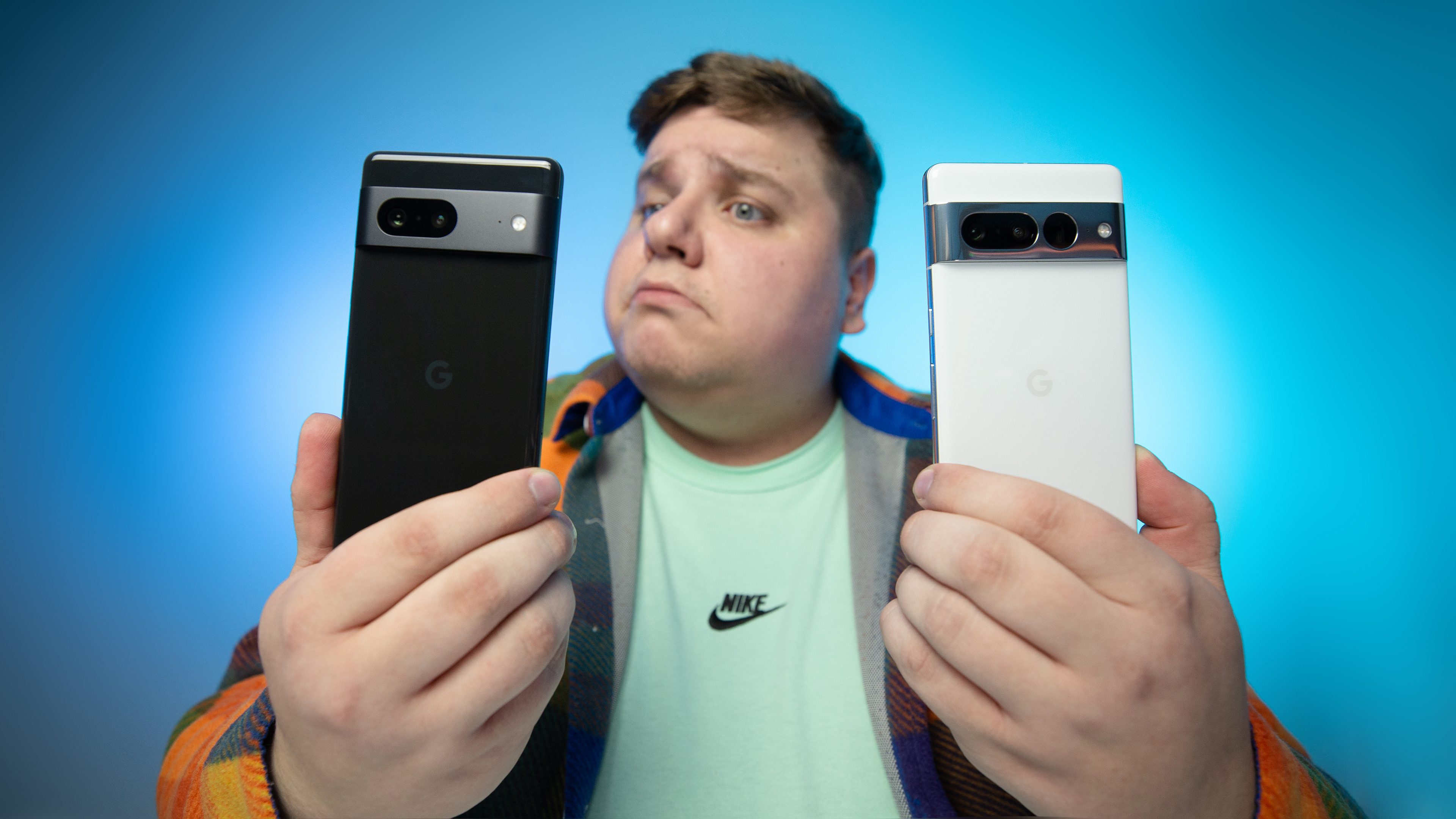 The Pixel 7 and Pixel 7 Pro both offer the best photo experience in their respective price ranges. They share the same design, the same Tensor G2 processor, and the same Android 13 interface.

The differences between the two models lie in the screen, the camera module, and the battery capacity. The Pixel 7 Pro has a higher refresh rate and a larger display. It also has an additional photo sensor with a dedicated telephoto lens accompanied by a slightly larger battery.

If you look at the new Google smartphones for the first time, you do not see any major differences between the Pixel 7 and Pixel 7 Pro apart from the size. Google uses the same design language as on the Pixel 6 of last year. It has just added aluminum on the camera bar that hosts the camera module. I find it to be less pretty as it looks less futuristic than the 100% glass design, but it also promises to be more solid, so there’s the upside.

The Pixel 7 and Pixel 7 Pro are rather massive smartphones. I find them to be rather thick and a bit on the heavy side. They happen to weigh in at 212 g for the Pro and 197 g for the basic model. They are IP68 certified and hence are waterproof to a certain degree, they both have Gorilla Glass Victus on the front and back, and an aluminum frame. In a nutshell, they tick all the right boxes for a premium design.

We get three colors: Snow White and Volcanic Black for both models. With a lime green version for the basic Pixel 7 and a sage green for the Pro.

For the screen, we have a 6.3-inch OLED panel in Full HD+ on the Pixel 7 and a 6.7-inch AMOLED panel in QHD+ resolution on the Pro. The Pixel 7 Pro also has a higher refresh rate of 120 Hz, while the Pixel 7 is locked at 90 Hz. We also have LTPO 2.0 technology on the Pro that allows you to vary the refresh rate more precisely, between 1 and 120 Hz.  In addition, the Pro has a slightly higher maximum brightness of 1,500 versus 1,400 nits on the base Pixel 7.

In practical terms, the screens are of excellent quality on both models. The difference in refresh rate is not really noticeable to the naked eye. The maximum brightness was measured on only 5% of the screen, so you will never experience the 1,400 or 1,500 nits as stated. Rather, you would most probably experience 1,000 nits, tops, most of the time. This is still very good in terms of legibility, even under direct sunlight.

See also  What Is Twisting In Life Insurance?

The colorimetry is very good with very faithful colors and a well-managed temperature. It doesn’t pull too much toward the yellow/hot tones or toward the blue/cold range. However, they could have been a bit more vivid. There are not a lot of adjustments in the screen settings either.

The Pixel 7 and 7 Pro have the same Tensor G2 processor. This is a chip manufactured by Samsung using a 4nm process. On the GPU side, we have a Mali-G710. Both of them are mated to LPDDR5 RAM and UFS 3.1 storage. The Pixel 7 Pro has a little more RAM with up to 12 GB against 8 for the Pixel 7.

In terms of performance, we’re looking at very similar results to the first-generation Tensor processor we saw on the Pixel 6 last year. Clearly these two are not the most powerful smartphones on the market today.

But on my side, I was able to run Call of Duty or Apex Legends in 60 FPS with the graphics at maximum settings without any problem. I didn’t notice any overheating problem, either. On the other hand, on the basic Pixel 7, we experienced thermal throttling. The performance is much less stable than on the Pixel 7 Pro.

The benchmark below shows a simulated gaming session for 20 minutes, and the Pixel 7 Pro delivered a stability rate of 90% while the Pixel 7 barely exceeded 70%.

Basically, when it comes to long and intense gaming sessions, you can have occasional FPS drops. It’s not glaring, it’s still gradual, but it is still there. The Pixel 7 and 7 Pro are not gaming smartphones, but you can play with them without any issues, nor do you need to crank down the graphics settings.

The Pixel 7 and Pixel 7 Pro have almost the same camera module. We have the same 50 MP main lens, the same 12 MP ultra-wide angle, and the same 10.8 MP selfie camera. Multi-directional autofocus, optical stabilization, the works, they are all there.

The difference is that the Pixel 7 Pro also packs a dedicated 48 MP telephoto lens for zooming. Basically, it allows an optical zoom of 5x against 2x on the basic Pixel 7 in addition to a digital zoom of up to 30x instead of 8x.

Not surprisingly, the zoom quality is clearly on the Pixel 7 pro. This is expected as on the Pixel 7, Google simply cut and cropped from the photos taken in wide-angle at full resolution. As a result, we lose some degree of detail, sharpness, etc. But the Pixel 7 takes better zoomed-in photos than some smartphones which feature a telephoto lens.

The main lens does very well in all situations. Well, it’s mostly thanks to the software processing of Google. We have photos that are highly detailed. The dynamic range is really wide, so when it comes to complex photos, the contrast and exposure are always well managed. You can even adjust the color temperature, contrast, and exposure manually and separately.

When it comes to videos, both Pixels can shoot in 4K at 60 FPS with all lenses. That’s pretty rare and it’s downright cool. Google has also released its version of Apple’s Cinematic Mode called Cinematic Blur. It allows you to make a bokeh effect of blur in the background but it doesn’t work very well. We will dedicate an article and a dedicated video later.

Here we are when it comes to photography, and at this price, the Pixel 7 and Pixel 7 Pro are virtually unbeatable. You really shouldn’t stop at the MP count or the number of sensors. The main strength of Google is its software processing and that alone makes all the difference.

We do not have to talk about the software in detail: Of course, both models come with the most beautiful, purest Android 13 preinstalled out of the box. You can read more about what the latest iteration of the operating system has to offer in the linked article. Google also promises us security updates for at least five years for both the Pixel 7 and the Pixel 7 Pro.

Battery life is simply excellent on both models. On our benchmarks, they lasted more than 14h30m before falling below the 20% mark. We can easily last a day and a half without having to recharge them.

However, we felt that Google has been a little bit reluctant about implementing proper fast charging. Basically, Google flippantly mentioned that its official charger, sold separately, delivers 30W of juice. But, if you were to read the fine print in the very small details of the datasheet, you can see that the Pixel 7 only accepts 20W max and the Pro at only 23W. That’s really way too low in this day and age.

And as a result, charging takes far too long. With an unofficial charger, it took me an hour and a half to go from 0 to 100%. Google, Apple, and Samsung really need to wake up. Apart from that, we also have wireless and reverse wireless charging.

If you want to buy the Pixel 7, you can do so starting at $599. You will have to pay at least $899 for the Pixel 7 Pro. You can buy them from the official Google store but also from most e-retailers like Amazon as well as from major operators and MVNOs.

If you pre-order the Pixel 7 or Pixel 7 Pro, you can get it for $0 with qualifying iPhone or other eligible phone trade-in.

And compared to the competition like Apple or Samsung, I find the Pixel 7’s price/performance ratio more than interesting. You get one of the best camera experiences, one of the best software experiences (unless Google repeats the setbacks of the Pixel 6 last year), and excellent battery life.

And all this, for $200 less than an iPhone 14. Even if my smartphone of the year is still the Nothing Phone (1), for $100 more, and if photography is your main criterion, the Pixel 7 is clearly an excellent choice, even the best choice now in terms of price-to-performance ratio.

However, please let us know in the comments what your first impression is after the presentation of the devices, and whether you already know whether you would prefer the Pixel 7 or the Pixel 7 Pro.