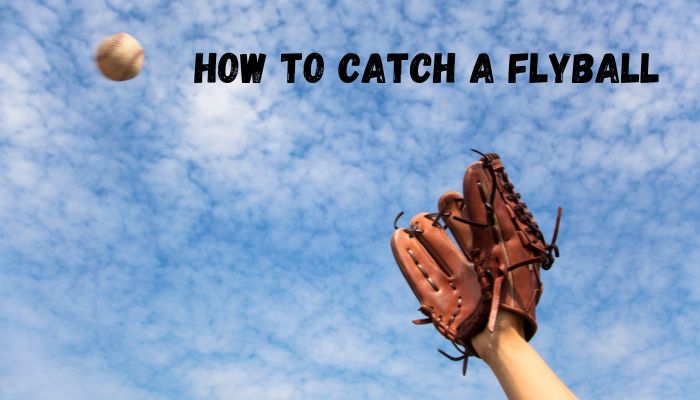 This post provides you with tips for catching a fly ball in baseball. Learn how to make the most of the situation and how to get better at this skill.

Catching a fly ball may seem like an easy move, but it’s not. Indeed, those MLB pros are highly trained in each fielding skill, and catching is one of them. In this “Baseball how to catch a fly ball” post, that’s what I’m gonna share.

From my decade of experience in baseball, one thing I can advise you is that being a fielder is an underrated role, yet it’s an inevitable one. Whether you’re a lead batter or pitcher-centric player, you’ve to groom your fielding skills, especially catching.

Baseball catching is segmented into different stages, including judging, catching, and throwing the ball. Not only that, but you’ll also work on your team communication. A regular practice plan with some effective catching drills can help you conquer this skill.

This article is a complete source of guidance for players who want to improve their fly ball catch n throw techniques. There is also some additional information on helpful drills. Read along to learn more.

How to Catch a Fly Ball Hit?

To catch fly balls like those MLB advanced playersfirst, you need to learn all the phases relevant to this action. Follow the below instructions to become a competent flyball catcher.

The first step a coach should follow to teach catching fly balls is actually the most ignored one by beginners. It’s the ability to look at the ball through your baseball cap.

Looking through the bill of your cap is an easy way to guide you if it’ll land in front of you or sky high on those line drives when the batter makes a ball hit.

Step 1: Sight through the Cap’s Bill

If the ball is below your cap’s bill when you’re looking straight at it, it means it won’t fly over your head. So, you don’t need to make giant steps back to read the ball.

And if the ball gradually goes higher to the bill of your cap, meaning you would need to head up, and the ball will cross your position. In that case, you’ll need to go backward to match the ball’s landing point.

Step 2: First Move Should Be Backward

Another good strategy I used to follow as a player is to step back and side by side consistently. It helps you to identify if there will be any gap between you and the ball at the landing point. Hence, you can make linear movements according to your need.

You should step backward first, even if the ball lands in your front zone. It’ll give you a solid position to begin the stride or sprint forward.

Most high school, minor league, and even college league outfielders make a prevalent mistake: they just stand in the same spot throughout the game.

Even young players positioned in the infield ground also make this mistake. They just don’t make any sort of adjustments.

You’ve to think about where you’re at in the lineup and what the hitter did his last at-bat. It’s essential if you want to be in the right position when the ball takes off the bat.

For example, a leadoff guy has hit a weak ground ball to second base the entire game. Well, then, most likely, he’s not gonna make a home run over your head or bat off the wall.

See also  in Beijing and several cities in China, the spectacular progression of the disease

So, you can take a couple of steps in and play him a bit more toward the second base. In that way, if hitters hit high a pop fly or line drive that way, you’re right there in a ready position.

Run Towards a Fly Ball

Well, in the first phase, you’ve done enough to make yourself ready for a fly ball. Next, you’ve to go through the tougher part, which is running to grab a fly ball.

There are logical reasons why maintaining a flawless sprint is essential yet challenging.

Firstly, the air impacts the path of the fly balls. Therefore, even though you predict a spotting point, it may land in a different location.

Secondly, depending on the fly ball speed, you need to pace up or slow down your running and even do both simultaneously.

You can run in an angle or straight path when sprinting toward the ball. There is no regulation to it if the ball is gonna land in your front zone.

But you should always keep your head up to have the ball sights throughout the time. This will help you identify if the ball path changes due to the air force or aerodynamics.

Things won’t always be the same. Sometimes, you’ll find the ball will fly over your head. And if you’ve read the ball correctly, you can predict this earlier.

In this case, when the ball flies over your head, you’ve to run along with the ball, following its path. Keep your head towards the ball. To avoid accidents, get a 1-second interval sometimes to check whether you’re crossing the foul line or not.

“Backward running doesn’t mean you’ve to run backward against your body. If the ball is flying faster, make a straight-body run, meaning your body should face the opposite of the ball while running.”

“And if the ball is going comparably slower, do a straight-look sprint, meaning your body should position facing the ball.”

It’s needless to mention that communicating with other outfield players is vital during fielding. And in terms of fly balls, avoiding hitting each other is mandatory.

Though it sounds funny, since outfielders are looking upward while running, they may accidentally hit other baseball players, especially when reaching inside another fielder’s zone.

So, if you’re determined to catch the ball, give your teammate a call. Be open to receiving other advanced players’ calls too.

Wondering why I’m saying this about cooking and catching? A very important tip is related to this term. I learned it after making months of mistakes during my minor league baseball career.

Step 1: Before the Catch

Most players drift towards the ball slowly. They think it’s okay if somehow they can reach the ball’s landing spot and catch it.

However, baseball doesn’t work like cricket. It’s never like achieving a catch means the play is over. You still need to throw the ball to the next base to get a double play or a force out of the base runner. So, how do you do that?

Instead of drifting towards the landing point slowly, you’ve to run faster and reach the point before the ball lands. And then you cook for some moments and wait for the ball. Also, when reaching the spot, you shouldn’t lay your legs.

Keep your legs moving up and down, so you don’t trap yourself when sudden movement or a good drop step is necessary.

Step 2: During the Catch

Your glove hand should be positioned upwards so that you can make a smooth catch. I like to consider the glove hand a funnel, waiting for the ball to land inside it.

Never point your glove hand perpendicular or horizontally. In that case, the fly ball will hit your palm area and bounce back immediately. So, there is a high chance you’ll miss the catch. To avoid this mistake, keep your glove hand vertical and angle position.

Ideal catch means grabbing the catch with your comfortable hand. For instance, if you’re a lefty and the ball lands on your left-hand side, meaning it’s an ideal catch.

The advantage of an ideal catch is you can catch and throw the ball without wasting a second.

But it won’t always happen. You should also prepare for a reverse catch where you’ve to catch the ball with the opposite hand. And then switch the ball to the throwing hand to toss it toward the baseman or shortstop player.

Drills are inevitable to practice fly ball catching. These are baseball fundamentals. Below I’ve shared some of the best drills for a fly ball.

I keep this crossover drop step drill for my students to make them solid stone fielders for fly balls. In crossover drills, the outfielder should stand at a 30 to 45 feet distance from the coach or the partner.

First, he should throw a ball over his head, and the player should run towards the landing spot while making a crossover in the middle. And then he should run again.

He can repeat this as much as he needs to precisely identify the ball’s falling down location. When he reached the spot and balls arrived, he would catch them.

Often young players can’t reach the exact landing spot of a fly ball because of improper drop step issues.. In that case, he must dive from a distance to successfully perform the catch.

When practicing without a ball, you need to stand in the fielding position. And on the coach call, you should jump towards your side. Do it sometimes on the left and sometimes on the right. Follow the first image to get the diving idea.

After the dive, you must stand up as soon as possible and reverse your body towards the coach. Then act like throwing the ball towards him.

While you practice this skill with a ball, the coach will throw the ball on any of your sides. You need to dive to grab the ball. Following the previous method, toss the ball toward your coach.

1. How do I get better at catching fly balls?

The best way to get better at catching a fly ball is to keep practicing. Add a regular drill practice plan to improve your ball reading, running, catching, and throwing.

Some of the most helpful drills to sharpen fly ball catching skills are dive play, drop step, crow hop, and crossover.

2. When catching fly balls, where should your glove be?

Most pro baseball fielders keep their gloves on the opposite hand. It’s like if you’re lefty, keeping the glove on your right hand. And right-handers should do the opposite.

In this way, you catch and afterward shift the ball to your comfort hand and throw it towards the base faster.

No matter which hand you use to grab it, keep your glove position upward so that when you catch the ball, it doesn’t bounce off your palm.

3. What happens when you catch a fly ball?

When you catch a fly ball, line drive, or can of corn, the umpire signals others that the rule isn’t broken. He’ll make the signal by lifting his right arm and index finger. Moreover, the umpire will announce the hitter is out.

However, all the base runners should try reaching the following plates to avoid force out. You can also toss the ball towards any baseman to confirm a double play.

In conclusion, you should improve your judging skill to learn to catch fly balls. It’ll help you understand the landing spot of the ball. The following important skill is running, which is required to reach the spot before the ball arrives.

When it comes to catching a fly ball, glove position plays an important role. And as it’s baseball, you can be steel after catching the ball. You’ve to immediately prepare to throw the ball to any baseman, pitcher, or catcher.

So, what’s the most exciting part you find in this “Baseball how to catch a fly ball” guide? Let me know in the comment.

Check out more on fielding improvement:

How To Break In A Baseball Glove In 5 Minutes?