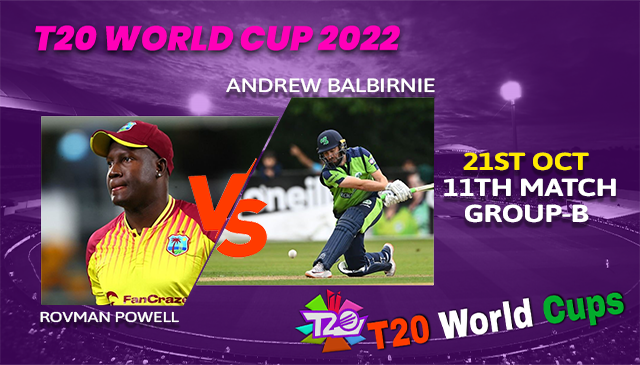 It was a win and a loss for West Indies in their two matches. They are currently in third place on the points table. They need to win this match at any cost to be able to advance to the super 12. West Indies can make this happen by winning this match by a big margin. Their net run rate can only be improved with a win with a large margin.

Ireland’s performance in ICC T20 World Cup 2022 had also been average. They won one out of two matches played. They lost one match and are laying at the bottom of group B’s points table. They need to win this match by a large margin.

During the previous match, West Indies won because of their outstanding bowling unit. They defended 154 runs and sent Zimbabwe home in 18.2 overs for 122 runs. As Zimbabwe’s most successful and highest wicket-taker from their side, Alzarri Joseph took four wickets in four overs against 16 runs, almost destroying its batting order. With the ball, Jason Holder picked three wickets in 3.2 overs while being charged with 12 runs. Akeal Hosein, Obed McCoy, and Odean Smith each claimed one wicket.

Despite losing the tos and being asked to field first in their last match against Scotland, Ireland won by six wickets. Their bowling unit did not impress. They leaked 176 runs in 20 overs. In their team, Curtis Campher was the most successful and highest run-scorer, taking two wickets in two overs against just nine runs. Bowlers Barry McCarthy, Simi Singh, Delany, and Dockrell failed to pick any wickets, while Joshua Little and Mark Adair each took one wicket.

Irish batsmen produced a stunning performance in the previous match. It took them 19 overs to reach their target of 177 runs. Almost all of their batsmen contributed to the total. Curtis Campher was the team’s top run-scorer, hitting 72 runs on 32 balls and scoring seven boundaries and two sixes. During the chase for the target, he remained unout, while George Dockrell also contributed runs. He scored 39 runs and smashed four boundaries and one huge six during his inning. Lorcan Tucker scored 20 runs.

Three of the seven matches between West Indies and Ireland were won by West Indies, while two matches ended in a draw.

From a paper perspective, West Indies is a stronger team than Ireland. West Indies is the favorite to win this match based on our match prediction. There are many reasons why West Indies are such a favorite team. The key factors are as follows:

West Indies’ key batters are back in good form

Additionally, Ireland has a strong batting order that is in good form

There are a lot of experienced and young players in West Indies when it comes to the t20 format. In addition to having a strong batting order, this team also includes some well-known hitters of the t20 format, so West Indies have a greater chance of winning today’s match. The equation of who will win today’s cricket match prediction and who will win the cricket match today is as follows.

This match has a 46% chance of being won by Ireland

A good total on the board is always a big advantage in such big matches. Based on our toss prediction, the team who wins the toss may choose to bat first.

At Bellerive Oval in Hobart, the 11th match of the World Cup T20 2022 will be played. As we observed in previous matches, this pitch is good for batting here. There is a slower surface here than we have seen before, which benefits the spinners quite a bit. We are hoping that the surface will get slower and become more difficult for batting in this match. 170 is going to be difficult to chase.

Hobart’s weather forecast predicts some clouds around on match day, but no rain. We should be able to play uninterrupted.

Possible Playing XI of Both Teams for This Match

Nicholas Pooran, Alzarri Joseph, and Curtis Campher are key players to watch in this match.

The Dream 11 Team for West Indies vs Ireland, 11th Match of ICC T20 World Cup 2022 has been compiled after checking the latest player availability.

See also  Police Take Down Gambling Network With Transactions Worth US$375,800,000

We will update you shortly.

Information about the venue, facts, and history

Blundstone Arena is also known as:

There are two ends: Church Street End and River End

Yes, there are floodlights

Marcus Pamplin is the curator

Click to Know: Ashok Gehlot Ruled Out As Congress President After Revolt

Click to Know: Babar Azam Cricket Career: Babar Achieves Another High, Now Only Player To Be In Top-Three Across Formats

Click to Know: Chandigarh Viral Video of 60 girl students of Chandigarh University taking a bath: Showing the photo of the boy, Accused Girl said – it had put pressure on me

Click to Know: Top 10 Greatest Female Batsmen of All Time

Click to Know: “Ben Stokes Is Ahead of Hardik”: Says Ex-Pakistan Captain, Lists Out Reasons