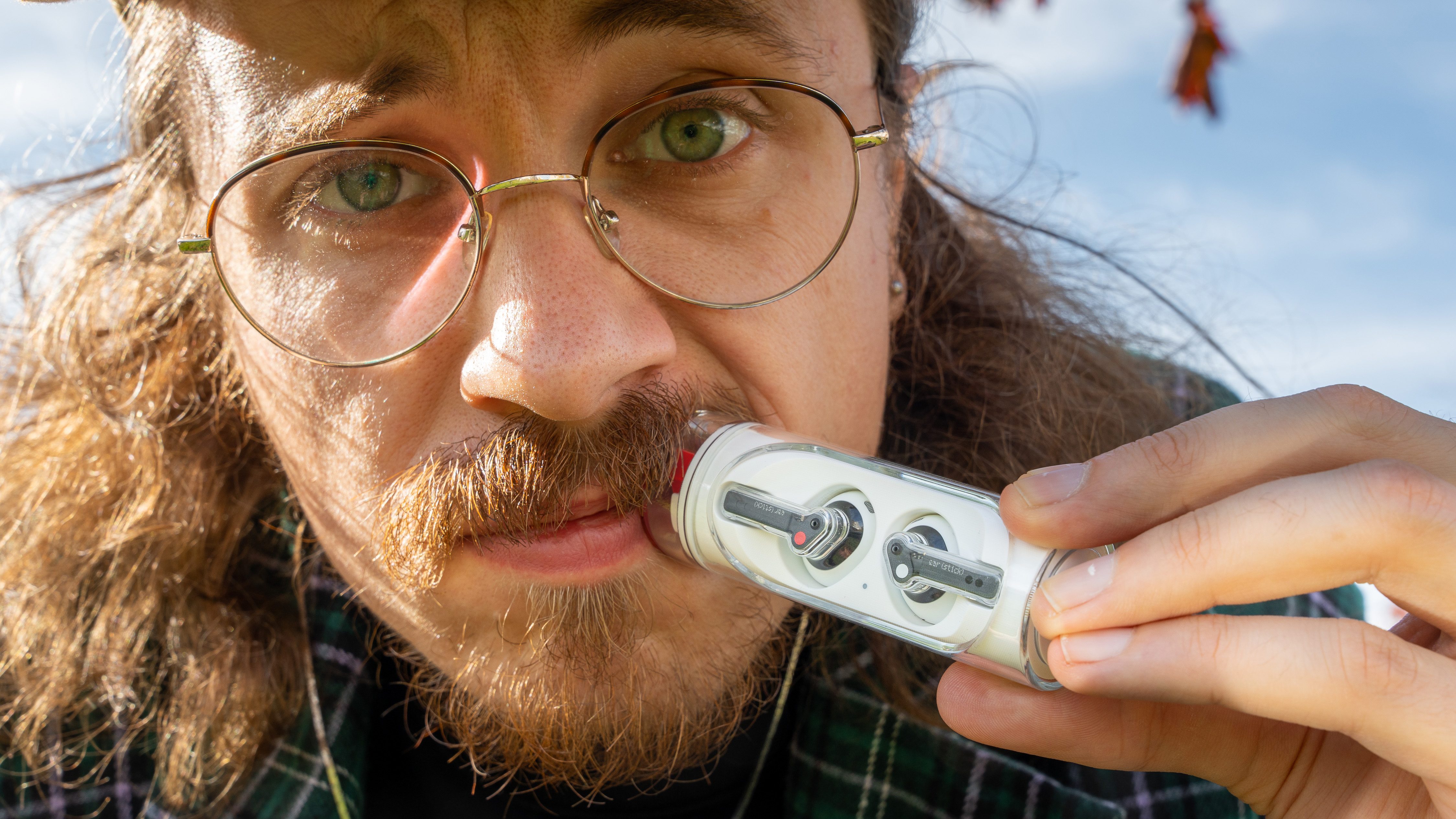 Nothing’s latest earbuds are based on the design of a lipstick, and that makes perfect sense! However, the end result is a fun and surprisingly practical form factor in everyday life. Whether the new Nothing Ear (Stick) also convinces in terms of audio quality and where corners are cut compared to the Nothing Ear (1), I will share with you in this NextPit review!

The Nothing Ear (Stick) in a nutshell

The new Nothing Ear (Stick) has one outstanding quality above all: it is wonderfully unusual! The company’s intention to bring back the “fun of technology” has been rather successful so far. However, once you get used to the new charging case, you are left with a pair of true wireless earbuds that are below average in terms of audio quality and functionality. They are comfortable to wear and lightweight, but without ANC and with a very flat sound, they are not technically convincing.

At the heart of the Nothing Ear (Stick) are two 4.4-gram earbuds that fit snugly within your ear canal. Outside of your ears, Nothing dresses them in an unusual charging case that you can twist open and close, and many people will easily mistake it for a lipstick. The IP54 certification offers protection against water damage. Fortunately, Nothing relies on squeeze gestures to control the earbuds in order to provide more accurate controls in the rain.

The goal when designing the Nothing Ear (Stick) was to bring back the “fun of technology,” according to the manufacturer. The brand’s first earbuds debuted with the ability to double up as a fidget spinner, allowing you to spin the charging case between your fingers to pass time. The continuation of this idea has resulted in a charging case that you have to twist open to remove the earbuds.

Nothing released the charging case in an elongated shape that reminds us a bit of a lipstick. To match expectations, the manufacturer dressed the earbuds in packaging that reminds us of perfume or lipstick. The concept works, where the “unboxing experience ” is more fun than most of the other in-ear Bluetooth earbuds, despite the fragile tear tapes.

Let’s not be blinded by the marketing drive that showcases the rotating movement to deliver an exciting operational concept. The charging case is balanced in such a way that it doesn’t roll off the table, and the rotating mechanism offers sufficiently low resistance that you can also turn the tube on with one hand. A major advantage over the familiar pocket mirror designs is that the headphones don’t fall out of their case when dropped.

The two earbuds follow the design of the Nothing Ear (1) with a transparent outer shell through which you can see the inner circuitry in all its glory. Unlike the Ear (1), however, the earbuds come without any silicone tips. Thus, the ultra-lightweight (4.4 grams) earbuds rest in your ears via two plastic knobs and are quickly forgotten about as there is no negative pressure.

However, the design comes with two drawbacks: One, you cannot adjust the size of the earbuds, which means it would be better to have smaller than larger ear canals. Since the Nothing Ear (Stick) is quite susceptible to sound changes when slipping, you will have to readjust the position of the earbuds more often in daily use.

In addition, there is the more annoying disadvantage of external noises making their way into your inner ear rather easily. Without active noise cancellation, the earbuds are therefore unsuitable for use in noisy environments, allowing you to be immersed in your own world while traveling on a train or airplane.

However, we already know what Nothing does very well: surprise, surprise, based on the OnePlus Buds Pro (read review)! As with the OnePlus models, you will have to squeeze the earbuds’ stems to control your music playback. The pressure points are sensitive enough, and Nothing managed to avoid the curse of incorrect input. You do not pause your music playback when you move the earbuds, and rain does not cause any unwanted inputs.

The Nothing Ear (Stick) comes with a wear detection feature. However, you will have to make do without multipoint Bluetooth connectivity. You can download the Nothing app for iOS and Android at launch. If you use the Nothing Phone (1), you will be able to use it without having to download the app.

A quick rundown of the convenience features Nothing included in its new earbuds: There’s a wear detection feature, and the (Stick) automatically switches to mono mode when you’re only wearing one of the earbuds while the other remains in the charging cradle. Another positive aspect is the companion app which looks really pretty on iOS.

The Nothing Ear (Stick) are equipped with 12.6-millimeter drivers. According to the manufacturer, this dynamic driver is one of the most sensitive on the market. Nothing does not provide information about the frequency range or the output power. Also missing out is ANC, a feature with which the Nothing Ear (1) caused a stir at a price of just $99.

While the Nothing Ear (Stick) is attractive enough based on the concept, you will have to live with some compromises at this price point.  The first in-ear earbuds from Nothing proved to be attractive based on the effective ANC and solid audio quality for under the $100 mark. It offered a good price-performance ratio which you will not find in the (Stick).

The Nothing Ear (Stick) falls short as it does not come with ANC and also does not offer passive noise cancellation due to the half-in-ear design. Hence, while you try to enjoy your favorite music tracks, your ears will quickly be disturbed by external noise. In times when even $50 in-ear earbuds do feature ANC, this is an unusual omission and above all, deemed as a standard feature in this day and age.

It is also noticeable that Nothing does not support HD Bluetooth codecs. Instead of AptX or LDAC, there are only AAC and SBC, which receive a low-latency mode in return that is automatically enabled in mobile games. While the codecs’ latency problems are thus counteracted, the other technical flaws remain untouched.

The Nothing Ear (Stick) sound thin and listless even after adjusting the integrated three-channel equalizer. The drivers used tend to overemphasize highs and are hardly fun to listen to during bass-heavy songs. This does not get better even when overemphasizing the lows in the equalizer. Although the sound changes noticeably, so the equalizers do have an effect, the lows are lost due to the open design of the earbuds.

However, since Nothing does not support HD codecs, the highs also remained too spongy and undefined to be fun with more complex songs. The legendary sound mixing of Steely Dan, for instance, sounds compressed with the Nothing Ear (Stick) and cannot really unfold its full frequency range. One is used to better performance for products that fall under this price range.

Here is something to take note of: if you have more problems with the audio of the Nothing Ear (Stick): The sound is strongly dependent on whether the earbuds are well-positioned in the ear. For example, if the earbuds lean a bit against a pillow, a lot of volume is lost. You will have to pay attention here because it is not possible to adjust the earbuds to your ears.

When it comes to battery life, we should briefly remember that the Nothing Ear (Stick) weighs only 4.4 grams. A runtime of seven hours of active music playback and 22 hours in combination with the charging case is very solid. However, the fact that the curious design of the charging case takes away the possibility of wireless charging, which is a pity.

After a few days of continuous use, I can confirm the manufacturer’s battery life claims with a clear conscience. At medium volume, the Nothing Ear (Stick) lasted for seven hours straight. Since there is no ANC, you do not have to remember varying runtimes with and without noise canceling.

What is noticeable in comparison to the Ear (1), however: Nothing does without wireless charging support. This is totally understandable since the unconventional shape of the charging case makes the placement of a Qi coil pretty much impossible. Thus, a USB-C port is available for charging, which is located in a red block on the side of the case. A USB-C to USB-C cable is included.

Nothing’s new earbuds offer an unconventional concept and a real eye-catching design, both for the earbuds and the charging case. It is not so far-fetched that Nothing presented them in a fashion show context. It is pleasing to note that Nothing’s unconventional design has more advantages than disadvantages in everyday use. In return, the young manufacturer’s design department has thoughtfully ironed out details such as the imbalanced round charging case.

While the Nothing Ear (Stick) is visually convincing, the manufacturer made too many sacrifices in the technical department. Sound-wise, the semi-open design without any options to adjust it to fit the user’s ears is a potential cause for concern. At the same time, HD codec support is missing, and sound from the 12.6-millimeter drivers is too treble-heavy and much too spongy.

However, the Ear (Stick) also lacks comfort features, most notably ANC and wireless charging. The latter is not a big deal due to the solid battery life of seven hours, but it is still missing in comparison to other models-first and foremost the sister model Nothing Ear (1). This brings us to the crux of the Nothing headphones.

Shortly before the launch of the Nothing Ear (Stick), which retails for $99, Nothing raised the price of its first true wireless earbuds to $149. Originally, the (1) was released for $99 and proved to be at an attractive price point with ANC, wireless charging, and an unconventional design.

At the end of October 2022, however, Nothing took the wind out of its own sails with its earbuds lineup. The (Stick) is unconventional, but there are already earbuds in lipstick format like the Huawei Freebuds Lipstick. As true wireless earbuds that retail for $99, they clearly offer too little and are not recommended for those who can resist the chic look. The Nothing Ear (1) are better, but have unfortunately become too expensive due to the launch of the (Stick). That’s simply too bad!