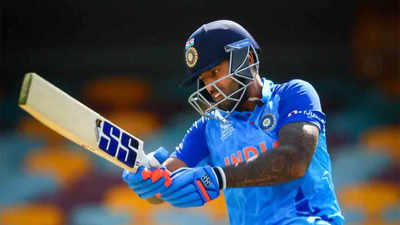 In a chat with TOI, India legend Sachin Tendulkar picks the four semi-finalists in the 2022 T20 WC Down Under and traces the evolution of the T20 game and predicts that the cooler conditions in October and November may see teams opting for a safety first approach in powerplay
A cricket World Cup in Australia, be it in any format, cannot be consumed without talking to the man who made Australia and Australians fall in love with his batting feats Down Under. Sachin Tendulkar, like many, is looking forward to the T20 World Cup and judging by his ‘Namibia has told the cricketing world today, “Nam” Yaad Rakhna’ tweet to describe the African nation’s upset victory over Sri Lanka in Geelong on Sunday, he is keeping a close watch on proceedings.

Tendulkar may have played only one T20I, but he was the backbone for Mumbai Indians from 2008 to 2013 and set scoring charts ablaze with innovative strokeplay. Having seen the T20 game evolve from 2008 onwards, Tendulkar is in awe at some of the shots the players attempt in the nets almost immediately.
Tracing the evolution of T20s, Tendulkar comments, “There are different kind of shots that players practise even in the nets these days. We used to practise them occasionally. But today the kind of shots these guys practise….”
A compulsive thinker and a cerebral cricketer, Tendulkar enjoys the different fielding positions captains employ in T20s. “Positions like short third man have become crucial. Earlier, players were still figuring out positions like these.”
Having seen two days of action from Australia where wickets are usually hard and bouncy, Tendulkar opines that cricket is not usually played in Australia in the months of October and early November and that could have a bearing on the scores. What then will be his tactics if he is padded up in the dug outs or mentoring one of the teams? “I would say, focus on getting good starts. I was watching the game yesterday (SL vs Namibia at Geelong) and the surface had moisture. The ball seamed for the pacers and gripped for the spinners. If there is not enough sun, and there is grass on the pitch, wickets won’t be hard. It will be better to focus less on strike rates and keep wickets in hand. Teams won’t go hard in the powerplay as you won’t get 185-plus or 190-plus. 170 can be a winning total.”
You ask him about India, and he says, “The balance in the team should make them qualify for the semis, comfortably.”
If that must happen, Suryakumar Yadav, right now Team India‘s X-factor and the prized scalp for rivals, will need to have a big World Cup. Tendulkar has seen Surya develop and prosper for both Mumbai, Mumbai Indians, and India. What has been the key to his evolution?
“Confidence and appreciation,” comments Tendulkar.
“There is no better tonic than being encouraged and appreciated,” Tendulkar adds and says the 32-year-old always had the capability and talent to play special knocks. “It’s just that he is doing it more consistently now. Success and appreciation have also changed him as a person. He plays so confidently today because he knows he need not worry about getting picked.”

Another cricketer he has seen from close quarters for India, Mumbai, and MI, is skipper Rohit Sharma. Of late, his form has been patchy and even his animated on-field demeanour after a misfield, dropped catch, or a poor over, has sparked a meme-fest on social media and have triggered debates about whether the pressures of captaincy are taking a toll.
Tendulkar though doesn’t want to read too much into it. “When someone is trying hard to make the team win and things don’t happen the way you want, these things happen. Some people are calm, others respond differently. If someone is calm, it doesn’t mean the person is not trying hard. At the same time if a person is very animated and aggressive, it doesn’t mean that the person is disturbed.”
Tendulkar chose not to comment on the DK vs Rishabh Pant debate and steered clear from discussing team combinations. But he just warned: “Summer has not set in; pitches may play differently. Best to be flexible.”
However, he did say that venues that will have drop-in pitches may produce belters as the wickets will be “well looked after.”
He ended the conversation by naming his semi-finalists. “India and Pakistan from our group. But I will pick South Africa as a dark horse as the conditions will mirror those that they are used to in October and November. In the other group, I expect Australia and England to qualify with New Zealand being the dark horse.”