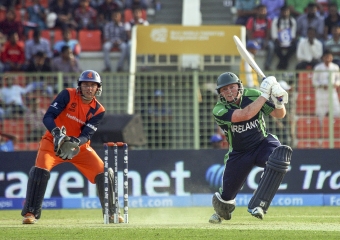 As the Irish side prepares to take on the West Indies in Hobart, we take a step back in time and look at the 2014 ICC Men’s T20 World Cup in Bangladesh through the eyes of former Irish international Andrew Poynter.

Poynter played 69 times for Ireland between 2008 and 2016, scoring 989 runs across formats – striking his highest T20I score of 57 against the Netherlands in Ireland’s final game of the 2014 tournament.

In 2014 you headed to Bangladesh for your first appearance at a World Cup. What was the emotion like for you ahead of that tournament?

“I was really nervous. It was my first world cup and although I had a good year leading into it, I never backed myself to play. I just went over there looking forward to the event as a whole. I felt as a team we belonged to be there, as we had loads of experience in the squad. We felt it would be a tough group to get out of, but we were confident of qualifying for the Super 10s.”

Ireland were in a group alongside Zimbabwe, UAE, and the Netherlands. How confident was the team heading out to Bangladesh?

“We knew we had to play well, as the UAE in those conditions were very good. Zimbabwe and the Netherlands had match-winners with both bat and ball. However, we had a good build-up, played lots of games, and had guys in good form. Also, at that time in T20 we had a confidence around us, as we had won qualifying tournaments regularly and had performed well at previous T20 World Cups.”

Had you any fear going out there that you might not perform up to expectations?

“Yes, very much so. The fear was there right up until the night before our first match, until I felt secure of a spot in the team. William Porterfield knocked on my door. I answered going ‘here we go, I’m not playing.’ We sat down and he explained that I’d be playing, and to just do what I’ve been doing all year with that bat at number four. My confidence levels went through the roof after that.”

How did you fell when you stepped out onto the pitch for that opening game?

“I couldn’t get over the noise of the music playing during the warm-up. It was pumping. I couldn’t hear Brendan, our Strength and Conditioning coach, shouting what warm-up exercises we were meant to be doing. The butterflies were going mental in my stomach at that stage.”

In that opening game against Zimbabwe – on St Patrick’s Day – you were set a pretty big target of 164 to win. It ended up being a final-ball thriller, but I’d imagine it was a pretty nerve-wracking game to play in?

“It was a great game which tossed and turned – from us winning it to them winning it. The change rooms are nervous places during a run chase, people jumping around and shouting when we hit boundaries, to biting nails and looking through hands when we have a few dot balls. The hardest thing is that you’ve got no control as you’re out. But there was huge relief when Stuart Thompson dived in to get us over the line and got us off to a winning start.”

“Yeah, it was a great first innings, and we had a good start in the powerplay. I batted through the second half of the innings. On a personal note, it was probably my best innings in an Ireland jersey, so I was on cloud nine. Kevin O’Brien gave us a big finish and we had the momentum heading into the second half.”

As we know, the Netherlands chased down the target with five overs remaining. How was the feeling in the squad?

“I remember after the game no one spoke in the change room for ages, just silence and packing up bags slowly. Everyone was hurting and in a state of shock. But credit where it’s due, the Netherlands batters came out and smashed us to all parts. For me personally, it was an amazing experience, as it was my first major tournament. I was happy with how I batted in the three games but was very disappointed that we didn’t go through and test ourselves against the big boys.”

You went to the T20 World Cup again in 2016, this time in India. Did you feel any different going over there, or was it just a case of you bringing the experience of 2014 with you?

“I felt a lot more at ease with the bits you have to do pre-tournament, like photoshoots, interviews, and signing bats. I have never been the most confident person with doing interviews but having had some previous experience helped a lot with confidence levels.”

Unfortunately, the weather intervened in India, but the experience of playing in such a cricket-loving country must have been amazing?

“Where we played all our matches was half-way up the Himalayan Mountains. It’s still the most picturesque ground I’ve ever seen and been fortunate to play at. That tournament was extra special too, as my brother Stuart was in the squad with me, while my mum and stepdad came over to watch us play. I knew I was close to the end of my career, so it was really nice to share the experience with them.”