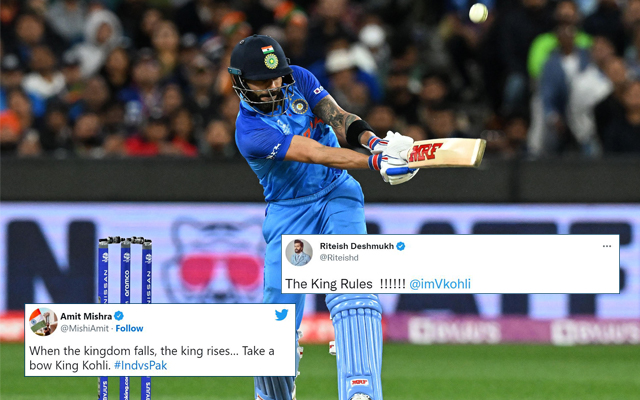 Veteran cricketer Virat Kohli stole the show at the 2022 T20 World Cup match between India and Pakistan on Sunday, October 23 at the Melbourne Cricket Ground. He entertained the fans by putting up a great show with the bat. His terrific knock powered India to a four-wicket win over the arch-rivals to open the team’s account at the mega-event.

Chasing 160 runs, Team India was in a spot of bother having lost four wickets for just 31 runs on the board in just over six overs. After that, Hardik Pandya and Virat Kohli steadied the Indian innings, putting on a 113 runs partnership for the fifth wicket. Pandya took on the charge initially, however, after he slowed down a bit, Kohli put his foot on the accelerator.

Team India reached 144 runs in 19 overs,  on the back of Hardik-Kohli’s partnership. Needing 16 runs off the final over, India lost Hardik on the very first delivery. A couple of tight deliveries from Nawaz followed, but Kohli’s six brought India back into the game. Ashwin hit a four off the last delivery to take India home.

For his stunning match-winning knock, @imVkohli bags the Player of the Match award. 👏 👏

Kohli stayed unbeaten on 82 runs off 53 deliveries, slamming six boundaries and four sixes, at a strike rate of 154.72. The experts and the fans lauded the Indian cricketer’s knock. They took to Twitter to congratulate the Indian team and hail, Virat Kohli.

Let’s take a look at how fans reacted to India’s win against Pakistan:

Kept his cool @AshwinRavi99 leaving that ball for a wide !!! What a game unbelievable!!’ #indiavspak is always more than a game ‘ it’s an emotion !!! 🇮🇳 greatness personified @imVkohli 👏

Yaayyyy…Happyyy Deepawali
What an amazing game.High on emotions, but this is
probably the most brilliant T20 Innings i have ever seen, take a bow Virat Kohli . Chak De India #IndvsPak pic.twitter.com/3TwVbYscpa

Kohli will always be a champion cricketer, one of the best batsman ever to play the game and someone who makes us proud to be an Indian. 🇮🇳 #Truechampion @imVkohli

Forever the King 🔥🔥Happy Diwali to everyone from @imvkohli 👏 #T20WorldCup #INDvPAK

What a knock ✊ king for a reason 👑❤️ what a run chase 🇮🇳👏👏 @imVkohli pic.twitter.com/v3gmQcQxcV

Take a bow, Virat Kohli – you are a champion. pic.twitter.com/30tgrxprvm

India India 🇮🇳 🇮🇳 India 🇮🇳 India 🇮🇳 @imVkohli take a bow, a champion innings #HappyDiwali everyone the best Diwali gift, what a match, #INDvsPAK2022 always a thriller when it comes to these two.

No one can touch the legacy of the King @imVkohli

I am really lost for words: Virat Kohli after his match-winning knock against Pakistan

Team India batter Virat Kohli won the Player of the Match award for his match-winning knock against Pakistan. Speaking at the post-match presentation, he expressed that this knock ranks at the top in his career. Virat Kohli said as quoted by Cricbuzz,

“It’s a surreal atmosphere, I have no words, no idea how that happened. I am really lost for words. Hardik believed we can do it if we stayed till the end.”

“Till today Mohali was my best innings against Australia. Today I will count this one higher, he added.