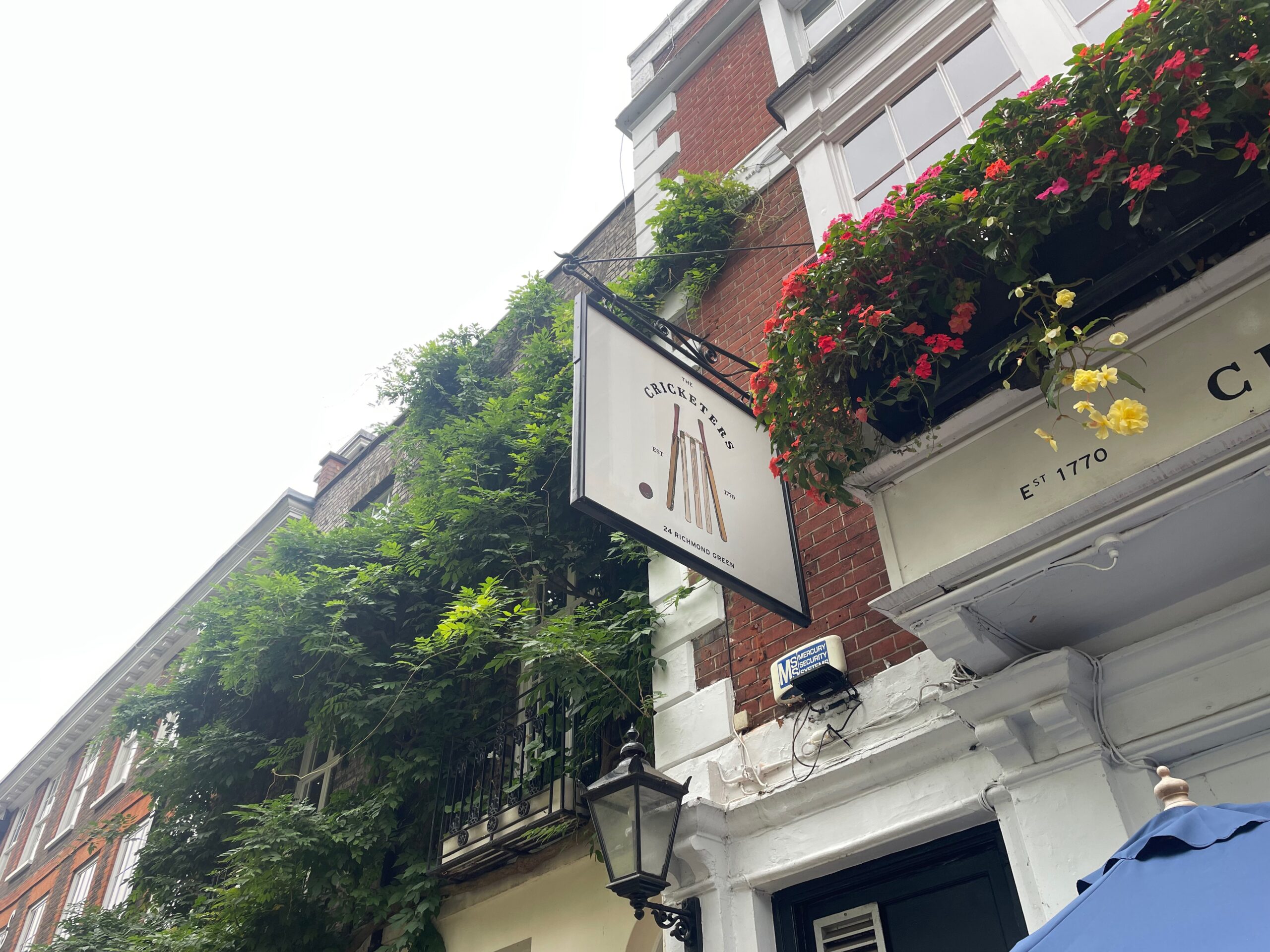 Sports Gazette Editor Seth Nobes explores The Cricketers pub cricket team, talking to some of the players who draw large crowds to a council-maintained wicket in the middle of Richmond Green

It is fair to say that the London Borough of Richmond, to the masses, has emerged on the sporting scene over the last few years because of a certain hit American TV series. Ted Lasso manages the fictional AFC Richmond and frequents easily identifiable spots in and around the surrounding area during the episodes. Such a spot is The Prince’s Head, known as The Crown and Anchor in the hit show, which is on the corner of Richmond Green.

This is not the only pub steeped in sporting history in this vicinity, however. Next door to The Crown and Anchor is The Cricketers Pub, a watering hole decorated with plenty of cricketing memorabilia. Upon learning of such an establishment as an avid cricket fan, I was keen to make the journey and enjoy a drink.

As I made my way, something that was taking place on the Green caught my eye. Several people spread around in white jumpers and trousers: the key signs of a cricket match. The presence of wickets and a bowler at top of his mark confirmed my suspicions. But this was unlike any other cricket field I had seen before, with signs laid flat on the ground around the Green informing those out for a Saturday stroll that they were forbidden from using it further. Else, they would be encroaching on the field of play, of course.

“We are constantly fighting to keep people off the pitch,” Rich Ellwell told me. Ellwell was more than happy to speak to me, on the condition that I mention the fact he was the top run scorer last season.

The Cricketers Pub, also known as the ‘ters, were playing the Wailers from Chiswick. Cricket has been played on the Green since 1642, including a county match when it first started. The match in question was a game between Surrey and Middlesex which took place in June 1730. Unfortunately, no details of the match remain. If the cricket I witnessed is representative of how the pitch plays, those 18th-century bowlers would have had a field day.

“The Green has been used for sport since the reign of Henry VIII,” another member of the team added, which prompted Ellwell to hit back with ‘I’m the one being interviewed,’ in jest. The team atmosphere, and the collection of once-full plastic cups provided by the pub, supported the statement that the ‘ters are a social side. Not part of a league, they spend the summer playing teams with a similar ideology.

“A team from Talksport including Monty Panesar and Geraint Jones came down for a match before the 2019 World Cup. We smashed them,” Ellwell was keen to add. He was not wrong about the outcome, but the manner of the defeat is seemingly disputed. The Metropolitan Pub Company reported that ‘the home side managed to pip the visitors.’

“We can only encourage people not to walk on it.”

“We can only have signs of a certain height because it is a public right of way,” Ellwell continued. The issues were exemplified during the five or so minutes we were speaking, with the interview interrupted several times to order passers-by off the active field. “We can only encourage people not to walk on it.”

The setting for the match was a gloomy Saturday in late September, the overcast conditions the sort to inspire a reorganisation of the kitchen drawers or the mounting of a campaign on the ever-growing pile of ironing. As a result, it was encouraging to see several people spectating, although the ability to buy a takeaway pint from the pub may have influenced several people’s decisions somewhat.

“On a hot day in the middle of summer, the Green will be rammed. We have had a few occasions with a couple of thousand people coming down, although the percentage of people watching the cricket is debatable,” the batter stated. The interview was then brought to an abrupt end, with Ellwell called into action. Given this was the last game of the season, the order was reversed, with the Cricketers Pub requiring just over 20 runs with two wickets remaining on a bowler-friendly pitch.

The familiar call of “do I need to get padded up” was uttered before Ellwell engaged in a race against time to prepare himself to see the innings home.

“It is better to play in the cold than the wet.”

With the County Championship being forced to play later and later into the summer, and even into the autumn, I was interested to find out the reasons why this match was being played in what in previous years would have been the off-season. I assumed it was not to shoehorn in a widely unpopular reinvention of the game.

“We don’t really play in August,” John Baddeley, a non-playing member of the team informed me. “In August, a lot of us are on holiday, and with the weather getting better in September, it would be a shame not to take advantage of it.”

When asked whether the team feels like they are missing out by not playing in the height of summer, Baddeley jokingly responded “it is better to play in the cold than the wet.” I was not so sure the sentiment about the cold was mutual with the fielding side, with an impressive selection of white jumpers and bobble hats on display. However, the excuse of cold hands would have most likely been exploited by the player who dropped a dolly after a short ball was hit high in the air.

The willingness to continue to play later does extend once the calendar is turned from September to October. “In October, we are not allowed to play due to the residences,” he added. “Anyway, who would turn up in October?”

“The council are responsible for the wicket, so it is them who maintain it,” Baddeley explained. “It is not covered, and not always fenced off.” This goes a long way to explain why the wicket favours bowlers ahead of batters.

“We have an intense rivalry with the Prince’s Head.”

The current crop of players have been together for some time, with ‘most of the guys joining around the same time as me,” Gents added. “We welcome anyone.”

When asked about his highlight of the season, he responded with “the Easter Bank Holiday weekend, when we play the Prince’s Head. We have a pretty intense rivalry.”

The lack of a pavilion means the team has to be inventive when it comes to meeting places. Apart from the obvious, when asked about the running of the club, Gents turned around and pointed to a green broadband cable box outside the front of the pub. “That is our unofficial headquarters,” Gents laughingly said.

The community feel of the side is clear, exemplified by an invitation to me to come to winter training when it starts in January. The fact that the majority of the 40 members of The Cricketers pub team have been returning for years is a further testament to this.

At a time when cricket is continually in the news for all the wrong reasons, it is refreshing to return to the game’s grass roots and see why it is more important than ever that the sport is inclusive. At Richmond Green, there were young families being politely told to get off the field of play before deciding to set up camp and enjoy the game. A couple had made the decision to buy a takeaway pint from the pub before sitting on a bench and seeing a middle-aged bloke swing hopefully on a historic wicket. Amongst the players, banter was being passed round of runouts and dropped catches. This is cricket in its purest form; those at the top could learn a thing or two.

Read next: Why Cricket Needs To Embrace The Mankad

Also in Cricket: “You’re everything that’s wrong with County cricket!”